Music
Speakers, Cabaret & Stars From TV
Mix & Mingle Entertainment
Activities & Equipment
Arena Shows & Street Theatre
Event Services & Equipment Hire
Seasonal Entertainment
Testimonials
It's always a pleasure to receive nice feedback from clients following their events... Here's some we received today!
Just a quick note to say a very BIG thank you for attending and making special my daughters 1st Birthday. Everybody was really raving about the activities available to them. I have already passed your number on to several other family members who loved everything you did.
My only regret is that I didn't really get time to speak to you more throughout the event!
Thanks again, much appreciated. Keep up the good work.

Just wanted to thank you for everything, all went fantastically well on Saturday night, everyone says best party ever, they say that every year so no pressure!!!

The band were absolutely fantastic and people are still talking about them, they really did keep the dance floor so full all night.  The photographer was brilliant, I am waiting on photos but he was extremely accommodating and I am sure they will turn out to be fantastic.  I only met the magician, I did not get to see him in action but I hear he was very good.

Just wanted to let you know that Saturday was a huge success and the feedback has been amazing.

Thanks again Alan for helping to make our night a memorable one and we look forward to working with you in the future.

I think that I have finally dried out and just out got over the weekend.  Many thanks for the photos they look amazing.

I have been meaning to speak to both yourself and Steve but just not had the chance to thank you both so much for all the hard work that you, Steve and your team put into both our events over the bank holiday weekend.  The venue on Saturday evening looked amazing with all the lighting and the jazz band, magician and silhouette cutter were just fantastic. On the Monday, the day was challenging with the weather being against us but again, you all helped to make day go ahead the best we could.  The children’s entertainer was just perfect and he seemed to fit into the theme perfectly, the kids loved him and the stalls with all the goodies.

Everyone had a great time at both events so again, thank you for all your help in making our celebrations one that everyone will remember.

'The service we received was exactly as we expected.  Couldn't have asked for any more. Thank you!'

'Just a note to say a huge THANK YOU for making our Christmas Event such a huge success last night.  I've had some incredible feedback about the evening and every element of it, which is down to all of you and your contribution to it.

Our Staff Christmas Party is always a difficult one to organise as you can’t always please everyone, but I think last night exceeded all of my personal expectations and the effort put in by everyone made the evening a roaring success.

Thank you once again; it was a pleasure working with you all.'

'Thank you for everything.  Our day ran perfectly and your team assisted in that.  Everyone was very impressed, Thank you!'

'We have used The Edge Entertainment Agency for a number of years now here at The  Marriott. Andy and his team have always taken care of our needs in great detail and have never once let us down. The music and DJ’s supplied to use are always of great quality and year after year we receive fantastic feedback following any event Andy and his team work on. We will once again be working with Andy & team throughout 2014.'

'Guests were really impressed with the casino, the guys were great on the tables.  The DJ was amenable, friendly & approachable.  Overall it was fantastic, we're sure that people will be talking about our daughters 18th for some time yet!, thank you so much.'

'I have been using The Edge Entertainment Agency now for approximately 4 years whilst working at different event hotels, I find the team extremely helpful, friendly and professional. We have booked a mixture of entertainers and have never received any negative comments, I feel confident in recommending them to any corporate, wedding or party function and know they will have a fantastic evening.'

'Thank you, was an easy, no hassle transaction'.

'Such a prompt, professional and personable service, so happy with our booking and definitely recommend / consider again for future events'. 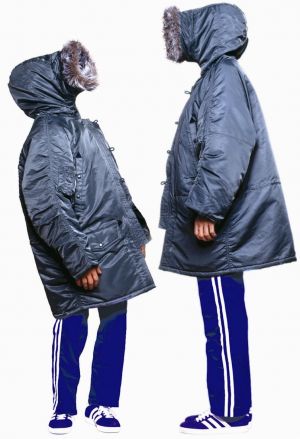 Men In Coats was created by Michael Dow. Its unique appeal leapt onto the British Stand up Circuit in 1999 by winning Hackney Empire's New Act of the Year and an almost unheard of sell out in their first Edinburgh run.

A year and two national tours later, they went back to ]Edinburgh and sold out again at the much larger George Square Theatre.

Since then, the show has travelled worldwide and performed in some of the biggest and most prestigious venues on the globe. A second team of performers was born in late 2005 to cope with demand and the show goes from success to success, performing in Thailand, the Bahamas, South Africa, Holland, Germany, Denmark, Switzerland, Malta, Spain, Greece, Italy, Turkey, Portugal, Monte Carlo and so many others including shows for British and European.

A YouTube video of the act passed the staggering 20 Million Views mark, and was running high in the top one Hundred Most Viewed Clips Ever!